Our beloved husband, father, grandfather, and brother, Boyd R. Ivie passed away peacefully Thursday, June 18, 2015, at his home surrounded by his wife and family. 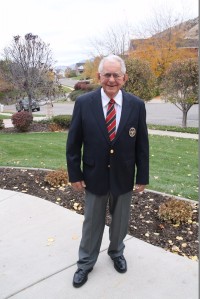 Boyd, son of Don and Dorothy Ivie, was born Feb. 14, 1932 in Provo, UT. He spent his childhood years working alongside his father on the family fruit farm in Orem. Graduating from Lincoln High School in 1950 as an avid athlete and Student Body President he went on to serve in the US. Navy as a flight engineer. While attending BYU he married his sweetheart Merlene Skinner in the Salt Lake Temple on November 22, 1955. He had an exceptional career working 35 years with the Boy Scouts of America influencing many lives for good. He worked as District Executive in Nephi, UT, Pasadena, CA, and Orem, UT; as Field Director in Idaho Falls, ID; as Council Executive for both the Cache Valley and Great Salt Lake Councils; and concluded his career working on the national staff as Area Director for the Western Region BSA.

He was an active member of the LDS Church serving in several leadership positions including bishop. His community service included involvement in Kiwans, The Rotary Club, and United Way. He continued his service with the BSA after retirement and received the distinguished Silver Beaver Award, the highest volunteer award a local council can extend. He enjoyed the outdoors, traveling with his wife, and spending time with his family.

Funeral Services will be held Saturday, June 27, 2015 at 11:00am at the Fox Ridge Ward Chapel, 150 East 100 North, Providence. Friends may meet family Friday 6-8pm at Allen-Hall Mortuary, 34 East Center, Logan, and Saturday from 9:30-10:30am at the church. Interment will be at the Providence City Cemetery.