TITLE:  “ADVENTURES ALONG MY SCOUTING TRAIL”

I talked in my last blog Fun Adventure and Romance of Scouting, of our Professional Scouting move from Ogden, Utah to Santa Barbara, California.  That was definitely a Scouting “Adventure”.

With three children, it was not an easy task to find an apartment.  I just about said, “suitable apartment” but we didn’t have much of a choice.  We found the ONLY apartment complex that allowed children.  The only problem was that there were no vacancies.

We ended up staying in a motel for nearly a month as we waited for an apartment to open up.  Then another problem emerged as we discovered that everything we needed was locked up in the moving van.  At long last, however, we were able to get the apartment we desired.

It was nice to get moved into our own place.  All of the council staff, including the boss, showed up to assist us.  We also met Alan, A Scoutmaster in the district, and he and his wife had us over for dinner that first night.

A couple of days later we brought our tandem bike home from the Scout office.  After we learned we’d be moving to Santa Barbara, we had left the bike when we were there for the conference.  It had been sitting and waiting for our arrival.

As we brought the bike home, my daughter, Jackie said, “Well,… We’ve moved to California!”  I guess we’d told her we’d ride our new bike when we got to our new home in California.  We later enjoyed riding that tandem bike – with all of us in Scouting uniforms – in parades and other fun events. 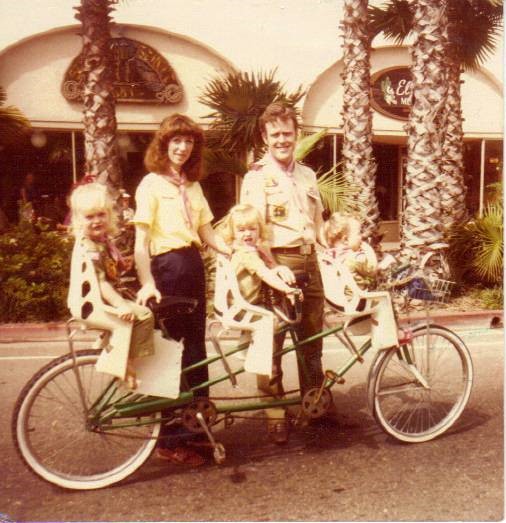 I remember some other special Scouting adventures, too.  Some of these came through association with the Kiwanis Club (which came because of my Scouting career).  I particularly remember the Christmas party our club sponsored at the local train depot for underprivileged kids.  The kids’ pleasure at seeing Santa Claus was evident in their shining eyes.

Some Scouting adventures came with the introduction of new programs that later became a full part of the Scouting family. I was thrilled to have been involved with the great Varsity Scouting program from its inception.  We started using Varsity Scouting as it entered the “pre-pilot” stage.  We were the pioneers who helped it become an official part of Scouting’s total family program.  I even got to help design the Varsity insignia that was used for many years.  I can still see that influence in the patches of today.

Another time, all of us professionals and many of our key volunteers were summoned to Salt Lake City to hear of some new programs. We there learned of the “enhanced” Bear Cub Scout requirements. That is also when we first learned of the new Tiger Cub program.  Tigers too, proved to be an exciting addition to the family.

When the Tiger Cub program was introduced, we had one of the first Tiger groups with our pack at Isla Vista (near Santa Barbara, California).  It was great to see the parents building a Scouting relationship with their boys at that early age.

We were all very pleased with the results of our Tiger group.  After a year of activities with their families, our Tigers were anxious to join our pack as a new den, already organized with their own leadership.

Our district was asked to invite fifty perfectly uniformed Scouts to be on hand to welcome the Queen.  I was happy to comply with the unusual request but I was surprised at how difficult it was to find that many boys with complete uniforms.

I don’t know how we rated, but we had front row “seats”.  The Queen walked within three feet of where we stood and took special notice of our group.  We had with us, a British Scout who was visiting friends in our community.  The Queen spotted the boy immediately, stopped and saluted him, shook his hand, and then went on her way.

I have fond memories of my friend “Ernie” from camp.  Wayne was the son of my District Chairman so we were friends before camp and after it ended also.  Being married, Lou Dene and I were anxious to share that same marital bliss with our friends who were still single.

Wayne fell within that “class” so we were concerned for his welfare.  Lou Dene had a former college roommate who also lived in our fair city.  We thought the two of them might be “perfect” for each other.  At first mention of it, Wayne was not very interested in our match-making help.  Later he reconsidered and called for Cheryl’s phone number.

That’s all it took!  Soon they had their first date and then a few months afterwards we witnessed their marriage as they were united “for time and all eternity”.  That was a special day for all of us … And after a few years of marriage, Wayne and Cheryl, and his folks, Dick and Belva are all still our very good friends.

The above experience probably should be categorized under the “Romance of Scouting” but I guess it all started with the adventure of that first phone call.

Yes, Scouting is full of Fun, Adventure, and even Romance!

Excerpt taken from his “Scouting Trails” Book: “MR. SCOUTMASTER!” at Scoutingtrails Connect with Kevin and read his article: “A Hundred Years of Scouting and What it Has Made Me” and others in the Scouting Trail blogsite