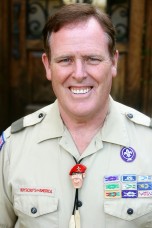 ENJOYING THE JAMBOREE TRADITIONS ADDED TO THE FUN

As I began sharing my Jamboree memories, I mentioned that any Jamboree is a combination of fun and tradition.  One of those long-standing Jamboree traditions that was a lot of fun was a “wide game” involving all boys and leaders of the camp.  For our wide-game, each participant was given a large letter from the Jamboree theme “GROWING TOGETHER”.  The object of the game was to find other people with the rest of the letters.  Once a new letter was found, we linked arms and set out to find the rest of the letters needed for the words.  The game made us think about the theme of the Jamboree, Scouting brotherhood and all of that.  It was a lot of fun.  And it is a great Jamboree tradition.  I am sure that they still do this.

The most impressive moment of the Jamboree was the final closing campwide campfire program.  The vision of those 28,000 Scouts and their leaders was really something.  I’ll never forget that scene.  The famous actor, Bob Hope, conducted the opening campfire program.  (He died a few years ago at age 100.)  Those fireworks were really something.  I am quick to admit that it was better than any 4th of July celebration that I have ever seen.

As the ceremony started, the arena of 28,000 plus Scouts and leaders was pitch black as all lights were extinguished.  Toward the end of the program, and at the given signal, we each took a three-inch candle from our pockets.  As we were directed to do so, the Scoutmaster from each troop lit his candle.  He then lit the candle of his assistants and troop leaders. Together they then lit the candles of all of the boys in their troops.  Within moments the place was lit up as bright as if it were noonday.  It sure was impressive.

We then heard a little talk about the influence that just one person could and does have upon the world.  We were told that we each had something to contribute and we were challenged to “let our light shine” to the world.  The principle of Service was very beautifully portrayed.  (I have since experienced this candle lighting ceremony at various times and at various Scouting camps. It is impressive each time – but it was particularly so at the Jamboree as I participated in it for the first time.)

In that beautiful moment, I reflected upon the many wonderful experiences that I had known over the past eight years of my Scouting days in the troop.  It had indeed been a glorious climb from Gnubie to Eagle Scout and beyond.  Tears came to my eyes as I recalled the service I had been privileged to give and to receive.  I realized that in the process, I had discovered me – Kevin Hunt.  I knew of my own potential and welcomed the opportunities for service and continued growth through the great Scouting game.  I realized that this is what Scouting is all about.

I reflected too, on the selfless service given to me by Scoutmasters Kimball Nelson and Jim Johnson and the many other adults.  I caught a small glimpse of the great blessing that Scouting had been in my life.  I counted my blessings and all that Scouting had given to me.  It had been such a big part of my life.  I was grateful for the experiences of “Growing Together” with my many friends in Scouting.

I stepped out of that campfire bowl with a renewed desire to serve the Lord and my fellowmen.  I thought:

One more thought came to our minds as we silently made our way back to camp:  “Troop 155 … THE BEST ALIVE!”  We really felt that we were the best alive. What a grand experience.

See this link for an introduction to Kevin the Scouting Trails Blogger.  Blogging articles have excerpts taken from Kevin’s many personal journals and Scouting Trails books including “MR. Scoutmaster!”, “Keys to Scouting Leadership,” “Gnubie to Eagle Scout”,  and others at his Scoutingtrails website.  Connect with Kevin and read his articles on Scouting blogsites such as The Boy Scout, The Scouting Trail and the Voice of Scouting.  Feel free to comment on anything you read!  Find Kevin on Facebook at:  Scouting Trails Books and Blogs.

To explore or buy Kevin’s books on Amazon, go to: amazon.com/author/kevinhunt